It was a normal cold night for Security Guard Sayed Basel Alawi, working a usual shift in Najibi Centre, Saar, ensuring everyone was safe. That was until Sayed Basel heard a loud crash. Trying to find the source of the sound, he was shocked when he found a car crashed into the side of McDonald’s wall, after the driver lost control of the car.

The high impact caused the car to immediately erupt into flames. Passersby looked over in shock, not knowing what to do, but Super Sayed was as quick as lightning. He immediately rushed over to help the poor man stuck inside the vehicle.
But Sayed noticed the doors were locked and the man was quickly losing consciousness. That didn’t stop him though, he desperately tried to kick the door in and rescue the stricken male driver.

Seconds later, Super Sayed had managed to carry the man out of the vehicle, but it was apparent that he wasn’t completely aware what was happening. He had inhaled too many fumes and was losing consciousness. Sayed took a second to calmly remember his First Aid knowledge, and gave the man CPR.

What would have happened if Super Sayed wasn’t on duty? Not only did he save the affected man’s life, but he also managed to control the situation all on his own. He succeeded in putting out the fire and even stayed by the victim’s side until police and ambulance services arrived on site to assist him.

It is this exact bravery and selflessness we possess in individuals at BMMI, and Sayed Basel definitely showed us he was up to the challenge!

Security Manager, Hassan Al-Khunaizi was very proud of Sayed Basel. “He has exceeded expectations by handling this difficult emergency situation very well,” he said. “Sayed Basel has showed courage, bravery and excellence in saving the life of one of our customers. I am sure this incident will have a positive impact for our customers, as it has displayed BMMI’s commitment to them.”

Super Sayed was honoured at a cake celebration, which took place in BMMI Tower, where he was awarded with a Winning Hearts award, as well as a bravery medal.

This is truly a brave act that will forever be remembered! Thank you Super Sayed and a job well done! Is it a bird? Is it a plane? It’s Super Sayed! 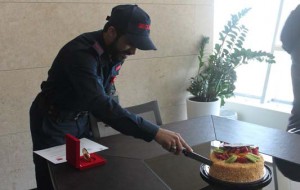