The team was given an introduction to the re-launch of our Winning Hearts programme as well as had the opportunity to watch the animated introductory video. They also had a Q and A session where any of their questions or queries were answered.

“Despite a two hour flight delay departing from Port Gentil, we still managed to take a tour at the site, organised a meeting with the client who declared himself very satisfied with GSS performance, and had a lively and positive presentation and discussion with the team, who are clearly putting the Winning Hearts value of team spirit into action every day,” said Greg.

The team even had time to get chased by Emmanuel the elephant at Gamba airport before departure!

A few hours later at 5.30am the next day, Paulin and Greg White were up again for a three - hour boat trip to the Perenco Batanga and Oba sites for another Winning Hearts Roadshow.

Once again the excellent performance of the team was highlighted by positive feedback from the client, who noted that there is always “service with a smile” at Batanga.

Greg added, “the workshop was followed by a lively presentation and discussion session which was appreciated by the employees as the sun set on the picturesque and calm landscape around the camp.” 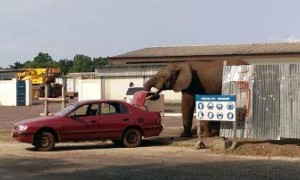 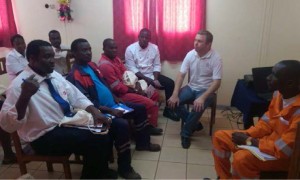 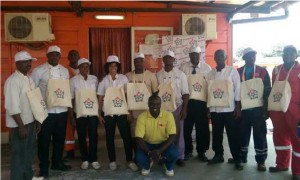