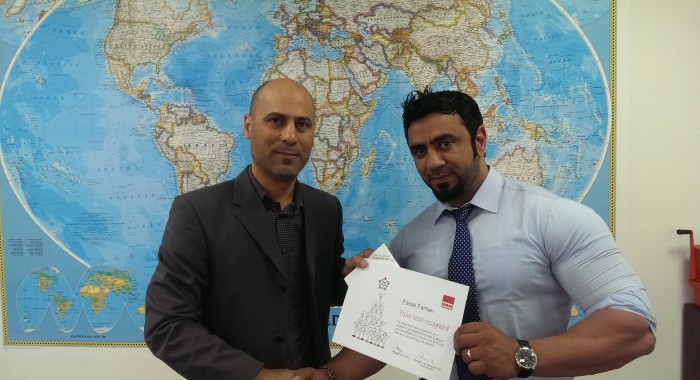 ISS employees have been on edge lately with the Hapag-Lloyd and CSAV merger. It’s been stressful for the Liner Agents representing Hapag-Lloyd, as the merger could take any direction and they could have lost the contract, with one of our biggest competitors, GAC, as a long loyal agent of CSAV in Bahrain.

“It was basically a face off and each participating agency had been asked to prepare a presentation, as per the instructions provided by the new Hapag-CSAV, to be presented during the agency selection meeting, which took place in Dubai on January 18,” said Liner Manager, Faisal Farhan. “Every location had only one opportunity to give it their best shot at the presentation, hoping that they would win! Other countries had stiff competition with agencies such as Kanoo and GAC taking part.  We here, at Bahrain, obviously had the biggest challenge to face GAC, who compiled of a team made up of their best senior management.”

From ISS Bahrain, Faisal Farhan was selected to lead this decisive presentation for the future of ISS Liner- and it was a success! He confidently delivered the presentation and put in so much hard work and effort to convince Hapag-CSAV management that ISS Bahrain is the right choice to handle this business.

“First I would like to thank BMMI management, and especially Mohammed Turaif for the recognition, I really appreciate it!” said Faisal.

Thank you Faisal, and well done!