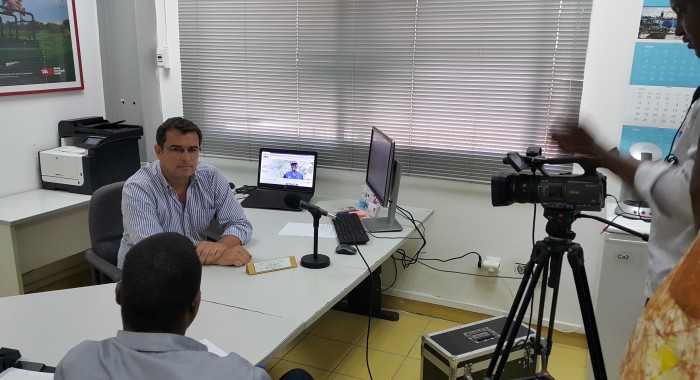 Lights, camera, action! BMMI Djibouti is proud to announce that they are going to be featured on Djibouti’s local TV!

The team was busy being filmed at their premises in Djibouti after being approached by television representatives who were interested in our work towards preparing fresh graduates for the business world. Although not aired yet, the news has been published in newspapers and the excitement has definitely been in the air!

Many of you may be aware, as previously featured in Missing Links, that BMMI Djibouti has taken on three fresh graduates to teach them the way of working life and prepare them towards their professional careers.

A representative from the Ministry of National Education and Professional Training in Djibouti visited the team to introduce them to a new training programme which supports graduates who are looking for certain guidance according to their field of education. BMMI picked three young enthusiasts from a list of 30 graduates who were struggling to find either the right training or job.

BMMI Djibouti is the first company in the Djibouti Free Zone that holds warehouse space and temperature controlled storage, and with celebrating its 10-year anniversary last year, BMMI Djibouti has decided to take a step forward and increase its clientele and boost its image within the country!

David Hanse, BMMI Djibouti’s Country Manager was interviewed for the footage, where he introduced the Group and the importance of equipping young people for their future careers. Abdi, one of the young trainees we have taken on-board, was also interviewed, where he shared his experience at BMMI so far, and how his confidence and determination has grown.

BMMI Djibouti HR Assistant, Nassim Abdullah stated that the team was excited about the opportunity to share their work on local television. “It is good exposure for BMMI Djibouti, as well as the Group. Putting forward companies like BMMI, that empower and believes in people, is something that should be promoted,” she said. “This documentary will air on national TV and is an excellent way of promoting our image and will hopefully show the strong presence of BMMI in Djibouti.”

Stay tuned to receive further updates about the television segment in future issues! Well done team and we cannot wait to watch your time in the limelight!