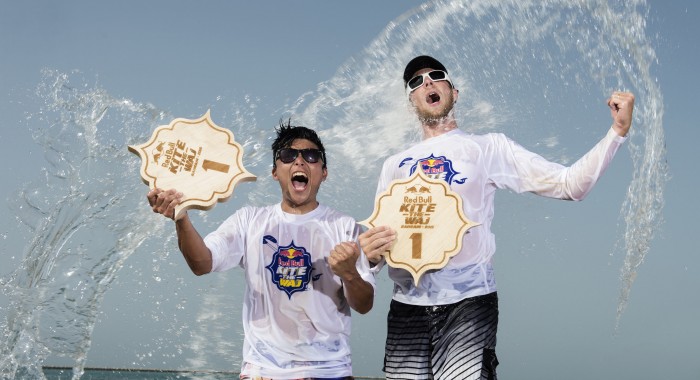 A prize giving ceremony concluded the Red Bull Kite The Waj at the Kite Beach in Amwaj Islands earlier this month.

It was a Thursday morning when all 10, two-man teams from Bahrain, Oman, the UAE, and Egypt, went ‘kite to kite’ in the hope of winning the second edition of the only regional amateur kitesurfing event, Red Bull’s Kite the Waj!

Each round highlighted a specific kitesurfing technique for the teams to show off their skills and accumulate the highest scores. The first round focused solely on a kitesurfing basic, air time, the technique which calculates how long the riders can get their boards off of the water.

After the first round ended, participants were chosen to proceed to the second battle, the competition for grab tricks. This round focuses on how many tricks the participant can do while grabbing their board. The kitesurfers had their hands full trying to get the tricks done before moving onto the third round, spin. This round was a crowd pleaser, as it was the most exciting watching the competitors being judged on how many rotations they can execute in each kitesurfing trick.

This is the second time in Bahrain that an event of this scale takes place, bringing together kitesurfers from across the region. Red Bull’s athlete Ruben Lenten, and Egypt’s up and coming kitesurf talent Karim Shawky judged the event together and interacted with the riders.

Commenting on the level of the scene, Ruben Lenten said, “Red Bull’s Kite the Waj has become a regional event and kitesurf is such a unique sport. It brings the community together and it’s great to see everyone out for the second year to come support their friends. The level keeps on getting better and I can’t wait for the next edition”.