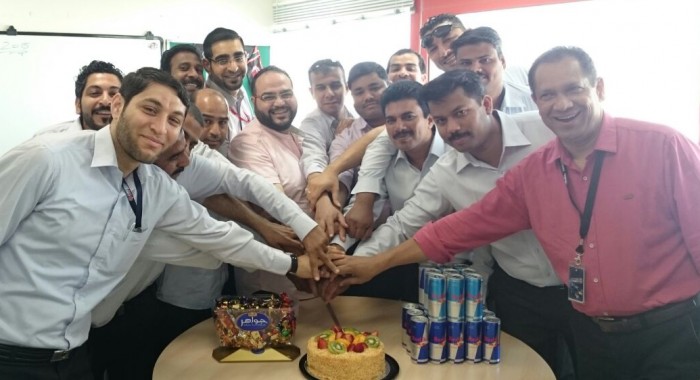 The Red Bull Bahrain team was all cheers at the end of last month, when they tallied their scores and realised they had beaten their record of sales for the month of May!

Since Red Bull was first distributed in Bahrain in April 2001, the team had managed to achieve a record sale of 505,000 cans in May last year.

With the hopes of being able to break their own record, they set their target at 553,000 cans for May 2015; being optimistic they would reach this and beat last years’ number.

However, the team was in shock when they achieved a sale of 555,096 cans of Red Bull…way above their target, beating their own record!

To celebrate, the team had a cake cutting ceremony in their offices in BMMI Sitra. Of course, there was Red Bull on offer, with Galaxy Jewels chocolates handed out as well!

“I would like to thank FMCG Distribution General Manager, Chris Charters and President & CEO, Gordon Boyle for the help and support they have given the whole team to achieve such a result,” said Red Bull’s Sales Manager, Fadi Al-Mahamid. “This will not stop us from achieving even more and more in the future, as we continue to work harder and harder. We still have seven months to go and I think it will be an excellent year for Red Bull! Lastly, I would like to thank my team, each and every single one of them, for really displaying dedication and hard work.”

Well done to everyone involved and keep up the good work! We look forward to next May, and we’re keeping our fingers crossed that you beat your current record!