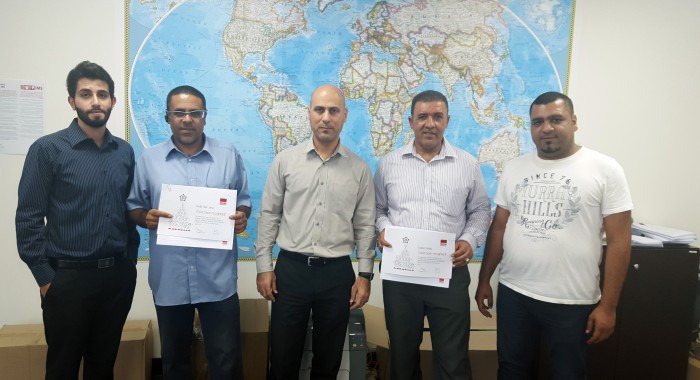 Since the restaurants opened, purchasing water for daily usage had proven to be costly. Abdul Nabi came to the rescue and liaised with the Electricity and Water Authority to install a water line, which usually requires months of waiting and following up. Abdul Nabi managed to fast track the whole process and saved approximately two months of waiting, as well as reducing the everyday operating cost.

That wasn’t all, with the help of Fadhel, the dynamic duo also solved an ice maker problem the restaurant was encountering. After inspecting the machine and noticed that the filters needed replacing, they requested a quotation from the supplier, who came back with an astonishing BD1,300. However, both Abdul Nabi and Fadhel knew that the job could be done for less, and managed to fix the issue for only BD39, saving Bayader BD1,261!

Project Manager, Ahmed Salman, awarded them both with Winning Hearts certificates for their efforts and determination to ensure the job was done.

“Abdul Nabi did a great job, as did Fadhel,” he said. “Abdul Nabi saved us more than two months of waiting and reduced our cost of purchasing water on a daily basis. Fadhel also initiated the idea of having a second line of water to avoid shortages. Moreover, they both fixed the icemaker machine and it only cost BD39! I believe they both deserve to be recognised and awarded for their achievement.”

Well done to you both and keep up the good work!