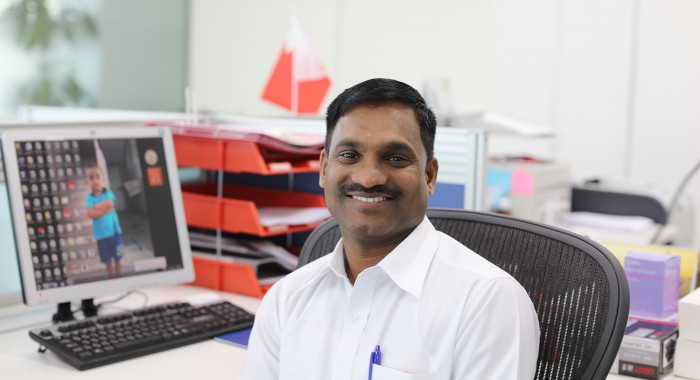 Many of you may know who Ramana Goud is, but for those of you who don’t, Ramana is BMMI’s very own Superman, who spends endless hours helping and catering to the needs of all employees in the BMMI Tower in Bahrain.

Running from office to office, making sure orders are in and everything is running smoothly, Ramana has a warm smile plastered on his face, five days a week, 9 hours a day!

The Corporate Communications took a few minutes out of Ramana’s busy schedule to learn more about his story, and his eight-year journey with BMMI.

Although Ramana has been working with BMMI since 2008, he moved to Bahrain back in 1997 from Hyderabad, India, to work for General Cleaning and Maintenance Services (GCMS). “It’s actually a very funny story how I ended up in Bahrain,” said Ramana. “I had never left my home country before coming here. It just happened and it’s something I am grateful for. It’s like my home now.”

Ramana explained that many recruiters from the Gulf visit Hyderabad. His uncle and brother were very interested in coming to Bahrain and had planned to attend one of the sessions taking place. Ramana had just completed his MA in Political Science and wanted to tag along to familiarise himself with the recruitment process and prepare for when it was his time. “Unexpectedly, my brother and uncle were not selected. A week had passed and I got a call from one of the agents…I was chosen!” This was in October 1997 and by December 9, Ramana was already in Bahrain!

He was just 24 when he started working for GCMS, in the cleaning division. When BMMI had signed the contract to work with GCMS, that’s when Ramana was first introduced to BMMI. “I remember Claire, the PA to the CEO at the time, was begging me to stay and work for BMMI. I was really thinking about it because I really liked everyone working here and just thought it may be a good move,” he said. On March 18 2008, Ramana joined the BMMI family and now he can’t imagine himself working anywhere else.

Ramana’s wife and two sons, Shaielesh, 11, and Ranesh, 4, are back in India and although he misses them, he says he loves Bahrain and it is his home now. “I thought I would only be in Bahrain for two years, it’s been over 15!” he said.

Ramana joined the company as an Office Assistant and earlier this year he was promoted to Corporate Assistant. Ramana explained that it’s just a title - he does everything. “I love working here, even if it’s something I don’t normally do, I love being on my feet and helping people. I especially love it here because there’s so much love from everyone, and I love them back! In the whole country, I think BMMI is the best company to work for, it has the best culture!”

When asked what advice he would give to his colleagues, he said, “work hard and keep working! Always open yourself up to learn new things!” 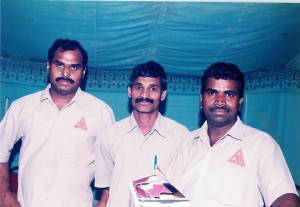 Ramana at a BMMI party when he was working for GCMS