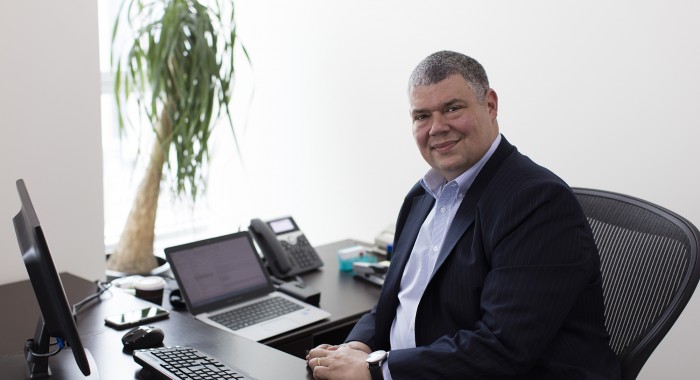 If you’ve visited the corporate office in the BMMI Tower lately, you might have come across a new face – that’s our newly-appointed Executive Vice President, Marek Sheridan!

Marek joined the team in early April, becoming the fourth member of the Senior Leadership Group (SLG), along with Gordon, Ammar and Robert. The Corporate Communications team was eager to sit down with Marek to learn more about his life and experiences; and here’s what we found out:

There’s no doubt about it – Marek is a family man. When he was first asked about his life, his family was on top of the list. Going back to 1994, when he was working in Jeddah, Saudi Arabia, Marek was smiling as he told us how he first met his wife Donna there. Fast-forward 22 years later, and today, Marek and Donna’s family includes three lovely children, Charley (Charlotte), Noah and Imogen.

When it comes to professional life, Marek describes how his journey took him across industries, roles, responsibilities and locations. Marek started his career not far from home, working in advertising for Saatchi and Saatchi in London, before moving across borders to Jeddah, Saudi Arabia in 1992. Marek opened an advertising agency in Jeddah called Dynamics, where a little twist of fate proves what a small world we live in! One of his clients at the time was no other than BMMI’s now Vice President of Bayader & Beverages Marketing, James Johnston! After a couple of years, Marek took on the role of Marketing Manager for SADAFCO, his work focusing on FMCG and dairy production, distribution and marketing.

Marek’s career path then took him to Coca-Cola, still in Saudi Arabia, where he worked as the District Operations Manager, his responsibilities including doing business across the GCC with an eventual move to the UAE.

In 2002, Marek moved to Dubai, UAE, where he joined MMI (Maritime Mercantile International) as Head of Marketing. At the end of 2004, he was promoted to General Manager in Oman, where he was posted for three years becoming a Board Director, a position he held throughout his tenure at MMI. Marek was then promoted once again, moving back to the UAE and taking on the responsibility of Area Business Manager. With hard work, talent and determination, he made his way up to Chief Commercial Officer in 2014, where he was also responsible for retail, group marketing and leading the HR and legal divisions. Throughout his career with MMI, he worked across the Gulf, the UAE, Zanzibar and Tanzania.

Fourteen years later, Marek decided to join our BMMI family. What drove him to make the move? Well, he was inspired by our President and CEO, Gordon Boyle. Gordon’s approach and openness to doing business, as well as his transparency, resonated with Marek. He was also very impressed by BMMI’s Winning Hearts culture. After spending over a decade with MMI, Marek was at a crossroads with his career and when he saw an opportunity with BMMI, and learned more about us, he decided to move to Bahrain and join the team. And although Marek mentioned how sad he was to leave MMI, he emphasised how delighted he is to be on this journey with us.

The feeling is mutual. Gordon expressed how excited he was to welcome Marek to the BMMI family. “On behalf of the SLG, I would like to express how excited I am to have Marek on-board. Marek has a wealth of experience in industries and categories relevant to BMMI, and is equipped with strong interpersonal skills that make him a great culture fit for our Group,” said Gordon. “I am very happy with how he is settling in and how the BMMI team have truly welcomed him with open arms.”

Since joining, Marek has been going through an induction process, where he is meeting with process owners and employees from across the organisation and learning more about who we are and how we operate. In this short time, he has already started building a reputation for being very perceptive, inquisitive, honest and down-to-earth. He also sees these qualities in the people around him.

While attending a session in the “Real-Life MBA” training programme, led by Gordon, Marek was very impressed by how honest the attendees were with one another and it reaffirmed that he made the right choice by joining BMMI. “I have been overwhelmed by the level of professionalism through my first meetings and I truly believe it is a world class organisation,” said Marek. “This reinforced that I made the right choice! I look forward to the days, months and years ahead, to make a difference wherever I can.”

Welcome to the family, Marek!