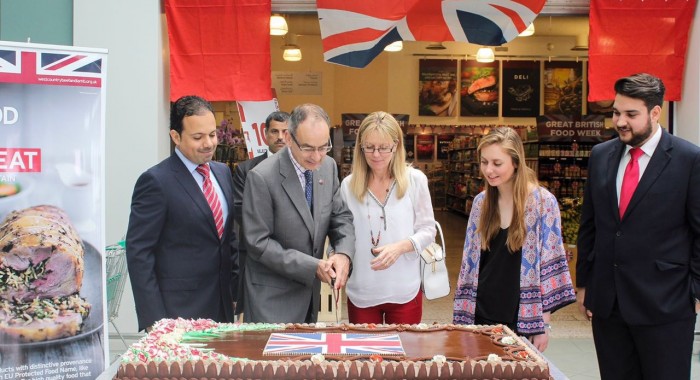 Alosra recently marked the Great British Food Week, and received a lovely visit from the British Ambassador himself, alongside his wife and daughter. The aim of the Great British Food Week was to celebrate the 200th year of British and Bahraini relations. Considering that the British community makes up a large part of Alosra’s customer base, as well as that the supermarket carries a substantial range of UK products, it only made sense to join in the celebrations!

Alosra stores were decked in Union Jack decorations and British products were put prominently on display, with some even offered with special discounts! The Ambassador, Mr Simon Martin, visited the Al Najibi Centre store on Wednesday, April 13. He was guided through a tour of the supermarket, where he had a look at the fresh food departments and got to see some of the British product offerings available, first-hand.

“The Ambassador was very pleased with the product range and volume of import from the UK and was amazed by the arrangement of the fresh food supply and the overall offering of Alosra, which he mentioned is comparable to UK supermarkets,” said Jaffar Al Asfoor, BMMI’s Vice President of Food Retailing and Production. In fact, Mr Martin was so pleased, that he didn’t leave empty handed and actually purchased a few products by the end of the tour!

The highlight of the visit, however, was the cutting of a cake adorned with the British flag. Weighing 15kg, there was a slice for everyone to go around, from our friendly staff to our happy customers!