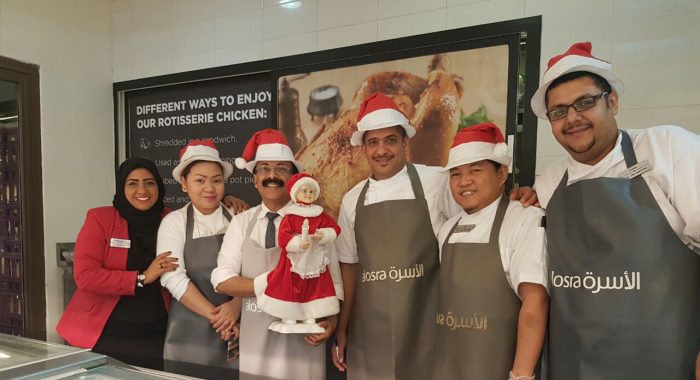 Alosra got into the Christmas spirit this year and made sure to spread the cheer. Employees were eager to put on their Santa hats, once again, and made sure that the joy of Christmas was felt throughout the stores. With the temperature dropping and the stores decked out for the season; it sure felt like Christmas. With Santa making his usual rounds at the stores, kids were overjoyed as they received little Alosra giveaways from him. Alosra employees were also excited to see Santa and hum along to the classic Christmas tunes, alongside the carolers.

After receiving the Christmas Order Forms, employees joined forces and got to work in the kitchen to make sure customers received a turkey dinner, nothing short of scrumptious. With trimmings such as brussel sprouts and chestnuts, cranberry sauce, gravy and dessert, customers left satisfied with a Christmas feast.

No matter how stressful the holiday season gets, Alosra is always there to take charge and ease your worries! Christmas may be over, but the festivities carry on, with New Year’s Day just around the corner.