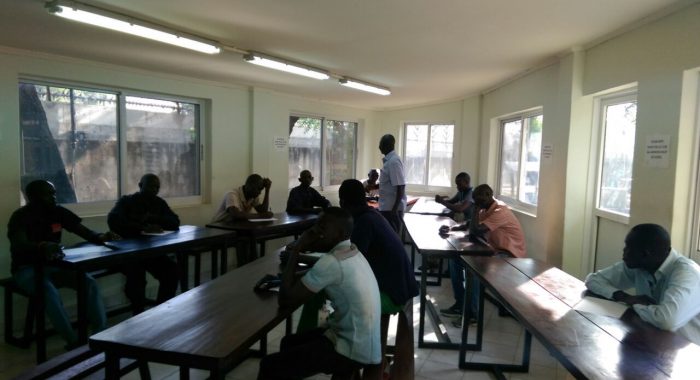 On 13 March 2017, Windle Trust International began conducting a four-month English Language Training (ELT) for our support staff at the Residence of the American Embassy in Juba, South Sudan. The training is conducted from 8.30am to 10.30am, each working day.

At the start of the training, learners identified and selected one of their colleagues, Stephen Okeny Abas, as their timekeeper. They also agreed on some ground rules such as observing punctuality, active class participation, respect for each other’s views and good time management.

A total of forty-three support staff are currently attending the ELT. Thanks to interactive, learner-centered teaching and learning methodologies, the learners have truly made remarkable improvement! During the reporting period, a mid-course assessment took place on 4 May. The results have showed that eleven learners who were previously in the Beginner level have moved to the Elementary level; two of the learners, previously in the Elementary level, were able to attain the higher levels of Pre-intermediate and Intermediate levels.

Since the start of the ELT to date, there have been many improvements. Learners are now able to share brief news stories in English with the rest of the class on daily basis. They have gained confidence in reading short stories by themselves, increased ability doing listening activities such as pronunciation, spelling, etc. Some learners, such as Rejoice Dawa, attended the training sessions even when she was on leave. Such a commendable move!

Openness and freedom of expression, encouraged by positive feedback from both the trainers and the learners, create a competitive positive learning environment. This makes every trainee feel that special recognition in appreciation towards what he/she has contributed. Our learners are now able to listen to a conversation in simple English, and even read simple texts with much understanding.

Most of our learners expressed their happiness about having been selected for the ELT. We would like to thank all of the learners for their true commitment, active class participation and positive attitude. Good luck in completing the rest of the training!