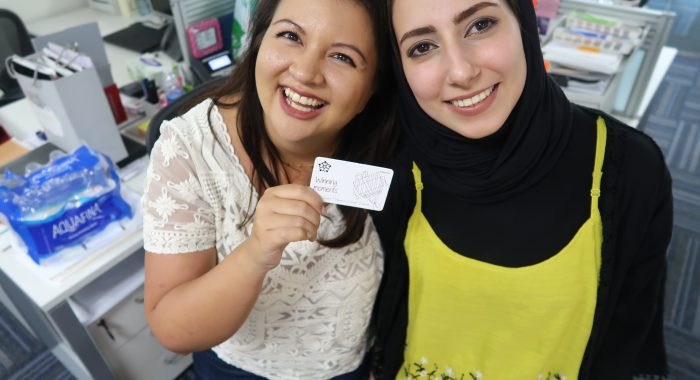 Many of you have been contributing to the workplace and displaying our Winning Hearts values and, as a result, our Winning Moments scratch cards have been taking the spotlight across our businesses in Bahrain.

On a visit to Alosra Janabiya, CEO Marek Sheridan was greeted and assisted by a lovely young man in the meat and fish department, Robert Ssenyondo. His attentive attitude and helpful nature was all it took to make Marek’s visit that much more enjoyable. He was quick to drop what he was doing to put the customer first and attend to their needs. Marek recognised Robert and handed him a scratch card, where he was a lucky winner of one of the top prizes!

Moreover, Vice President of IT, Aiman Alorayedh had a friendly interaction with Nabeel Mohammed Altajer from BLS Beverages, that ended in more than just a conversation.

“I had the pleasure of speaking with Nabeel for more than half an hour, and it was really nice to hear from him how much he likes what he does and how worried he gets for the company and customers in the areas that he handles,” said Aiman. “He always makes sure that his customers get what they ask for, at the right date and time, regardless of the area, despite the road blocks and checkpoints. This is all done to make sure that BMMI are present, and not give a chance to competitors to take advantage of it. It was just a pleasure to be around Nabeel and listen to his stories.”

Aiman was so impressed with Nabeel, that he handed him a Winning Moments card for his hard work and dedication, as well as to recognise him for all his efforts.

Aiman didn’t stop there, he also handed a scratch card over to IT Network Administrator, Yousif Salem, as he stepped up and assisted him with numerous tasks over a short period. Yousif proved he had what it takes to help Aiman ensure everything was completed and done on time.

In another occasion, HR Executive, Fatima Abbas was surprised with a scratch card for her honest, diligent and can-do attitude. Assistant Vice President, Yasmin Elisabeth Hussain, knew Fatima was deserving as she always gives her 100% and ensures that everything runs smoothly. She is always aware and happy for those who get recognised and goes out of her way to ensure they receive what they deserve. Her friendly and positive attitude shines through and is an embodiment of our culture.