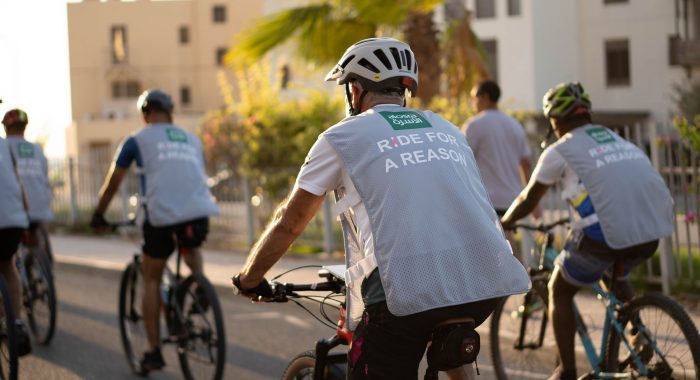 To mark Breast Cancer Awareness Month, Alosra supermarket is extended its support to Think Pink: Bahrain Breast Cancer Society and the Women Power Podcast through various initiatives that aim to raise awareness and funds for the cause.

To help raise funds for Think Pink and their initiatives, Alosra is donating all profits from the sales of the supermarket’s reusable jute bags to the charity until the end of the year.

Additionally, to encourage a healthy range of products to help boost immunity, the supermarket has also partnered with Dr. Julie Sprakel, Founder of Think Pink, to label a range of items in-store with the tag ‘Think Pink recommends’.

On October 22, participants of the Cycling Bees, a female cyclists’ group, started their early morning ride from Alosra at Najibi Centre, which was sponsored by the supermarket. The group then looped back to end their journey at the store, where they were introduced to the ‘Think Pink Recommends’ healthy range and encouraged to purchase the reusable jute bags, with proceeds going to the society. A medical professional was also available at the store to take blood pressure and blood sugar levels, and participants were presented with complimentary refreshments.

In addition, a similar event took place at Amwaj Islands on the same day, where Alosra collaborated with the management of Amwaj, the Art Hotel and Resort and the Discover Bahrain Team, to sponsor a bicycle ride across that began and ended at the supermarket’s Amwaj store. The cyclists were also introduced to the ‘Think Pink Recommends’ range, received refreshments and a free health check-up.

To help further raise awareness about breast cancer, Alosra collaborated with the Women Power Podcast. The podcast, which is available on the Apple Podcasts application, hosts speakers that have battled cancer, as well as specialists in the field and wellness experts, to share their insight on the topic and sharing stories of their recovery.

Commenting on the various initiatives taking place to support Think Pink and raise awareness and funds for the cause, Dr. Julie Sprakel, Founder of Think Pink, said that community engagement continues to be an integral part of the Charity’s success.

“I have come to realise, that whilst the Charity’s inspiration came from a personal journey, the pathway of Think Pink: Bahrain Breast Cancer Society has been driven by the community of Bahrain,” she said. “Members and volunteers of the Think Pink team donate their time, expertise talent and business acumen to support the ongoing work of the Charity and we are thankful for all the effort put into ensuring the continued support of our three pillars: awareness, education and research.”

To mark the month Mr. Jaffar Alasfoor, Alosra supermarket’s General Manager said, “We are proud to have partnered with multiple societies to help build awareness, not only during the month of October but throughout the year. Health and wellbeing are key focus areas at Alosra and our aim is to make a difference by allowing our customers to access the best possible quality product options and build knowledge around their health by being a lifestyle partner. Having collaborated with these associations and advocates has allowed another platform to reinforce the importance of health and check-ups.”