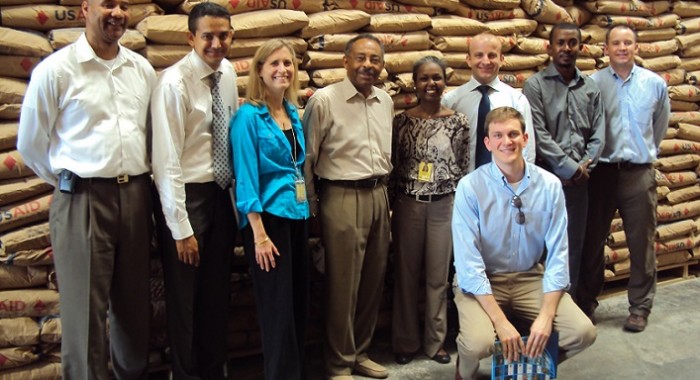 Senator Burris, who in 2009 took over the Illinois Senate seat vacated by President Barack Obama after his election as President, was welcomed by Sherif Muhtaseb, Manager, Djibouti Free Zone, Olivier Fricot, Country Manager, BMMI Djibouti, and other officials from DFZ and BMMI at the Free Zone.

Bahrain-headquartered BMMI, a diversified retail and distribution, and contract services and supply group manages the receipt, handling and storage of 45,000 tonnes per annum of products, and re-delivery of processed commodities owned by USAID in Djibouti. The USAID cargo is distributed mainly to Ethiopia by road, and smaller volumes are distributed by sea to Sudan and Kenya.

The BMMI 9100 square metre warehouse in the DFZ is the only Pre-Position Warehouse outside the United States that pre-positions American food aid for any destination. The facility pre-positions USAID food aid for Africa and Asia, and reduces delivery times by 75 percent. The warehouse holds stocks of corn-soy blend (CSB), yellow split peas and vegetable oil, which will be used to respond to emergencies in and around the region, saving a lag time of three to four months if the same food were to be dispatched from ports in the U.S.

Ali Dawood, Senior Vice President, EBU (Emerging Business Units), Economic Zones World and Chief Planning Officer, UAE Region said: “The US Senator’s visit was of great importance to us and gave us the opportunity to showcase the latest multi-dimensional developments in the Free Zone and port in Djibouti It also reflected the strong ties between the two economies. We are proud to be supporting and facilitating BMMI and USAID’s operations and plans in Africa.”

Olivier Fricot, Country Manager, BMMI Djibouti said: “Djibouti is a vital and strategic operation for the BMMI Group and a considerable part of our business here is with USAID. BMMI was first awarded the USAID preposition contract in 2007 and last year we handled more than 45,000 GMT of goods. Our facility deals with 35 to 50 containers daily and we have a storage capacity of 250 containers around the pre-position, which is a unique feature in Djibouti. We are very pleased that Senator Burris had the opportunity to visit our facility and witness the developments there first-hand.”

Through its wholly-owned subsidiary - BMMI Djibouti – the BMMI Group has made a substantial investment to date in the Republic of Djibouti. In January 2005, BMMI opened a state-of-the-art logistics facility in Djibouti Free Zone, comprising a US$ 5 million warehouse covering an area of 17,500 square metres, and providing ambient temperature, chilled and frozen storage areas. The complex is supported by the latest racking, materials handling and inventory control technologies, and operates in line with the highest international standards.

Managed by Jafza, the flagship company of EZW, the Djibouti Free Zone is a gateway to East Africa and one of the single most important strategic logistics hubs that allows companies located in DFZ to serve 380 million people in 19 countries in East and Central Africa.